Everything about PC's and stuff that have something to do with it, goes here.
Forum rules
Post Reply
185 posts

Well hello from my new PC

Build went great. A friend came over to help out and we just caught up while building it. Good stuff.

Had to take off the MB and put it on again as one of the I/O plate's leg thingies got inserted into a USB and we only saw it when we were about to start cable management but no big deal. 2 minute process to ditch the 9 screws and put them back on after resitting the MB. When we were going to peel the protective plastic off of the MB we found out we could as my fingers didn't clear the GPU so off it went for a sec, we peeled it and then put it back. Rest of it was pretty uneventful. It took us about 3 hours, being about 45min trying to figure out the RGB connection stuff which we didn't in the end lol.

The RGB headers for the fans are off as it's a 5V 3pin feed and the MB is 12V 4pin, (@Maxidyne sounds familiar?) so I'll look into how can I fix that and work on a solution soon enough. If I can't fix it because it's expensive to get an RGB hub or something of the sort, that's OK. Not like there are any other fancy lights apart for the MBs own LEDs so yeah, it's ok.

Rest of it is all nice and working. Booted Windows and got the drivers (all from the MSI support page from the B450, as well as the GPU ones, am I missing any? It all seems to work). Windows in the end was activated through a script I found online, apparently virus clear and all, which works with a Digital License instead of a Key. As soon as it works thats cool. I don't want to get into retail keys or OEM (and grey-area kinda illegal) key purchases so this suffices for now. Maybe in the future I do spend the $130 for a Windows key for peace of mind, but as long as this activation works well I'll stick to it.

Feels good, boot time is CRAZY and app opening time (Chrome for that matter, I'm only now installing Discord, Tidal, Steam and all of those so we'll see then) is insanely fast. It's also super quiet at idle/light load, probably just as much as my laptop.

Sorry I didn't get many pictures of the build process (I would have if I built it alone but as I had company I didn't want to stop at every step for a pic) but here's something. 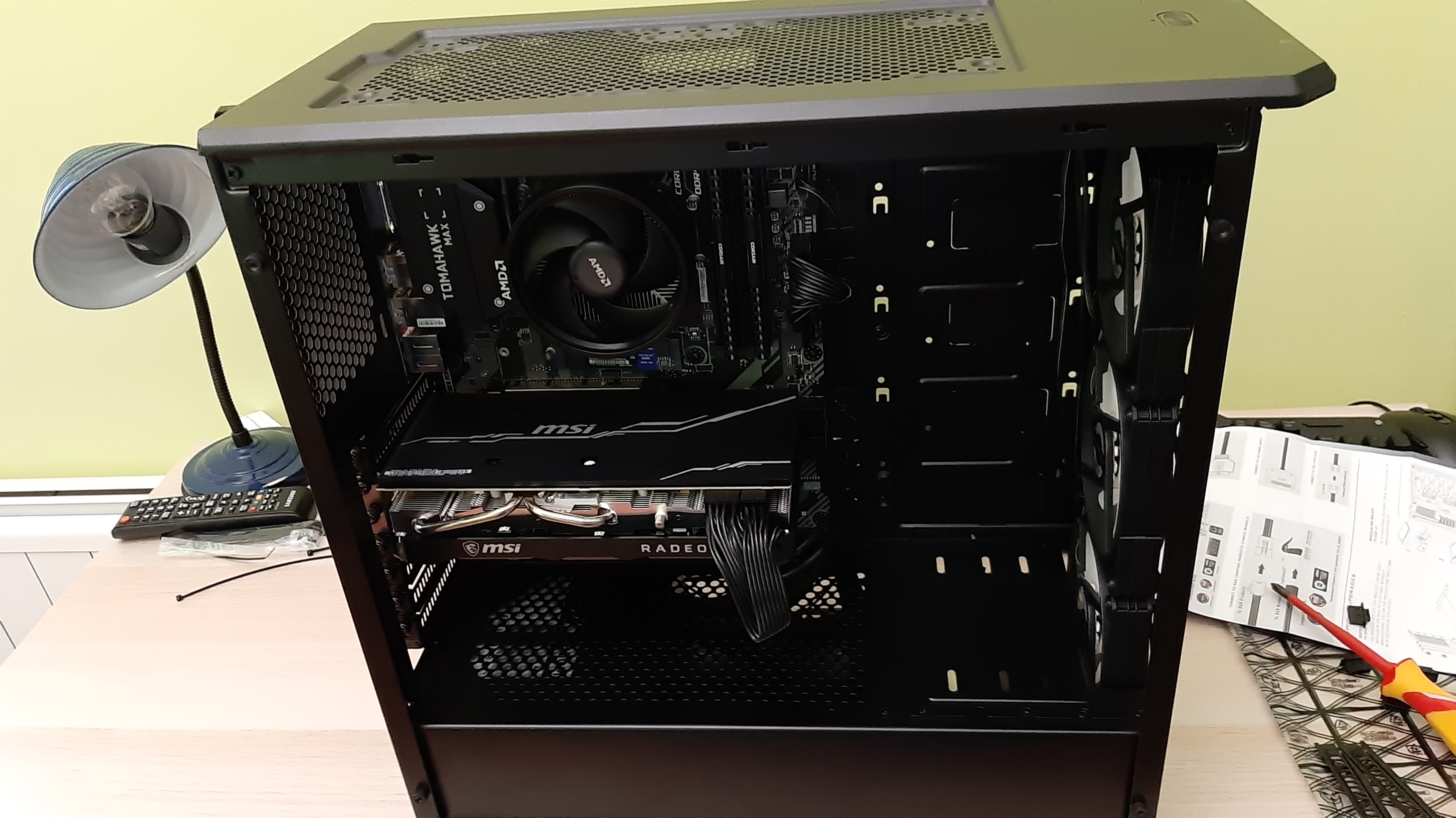 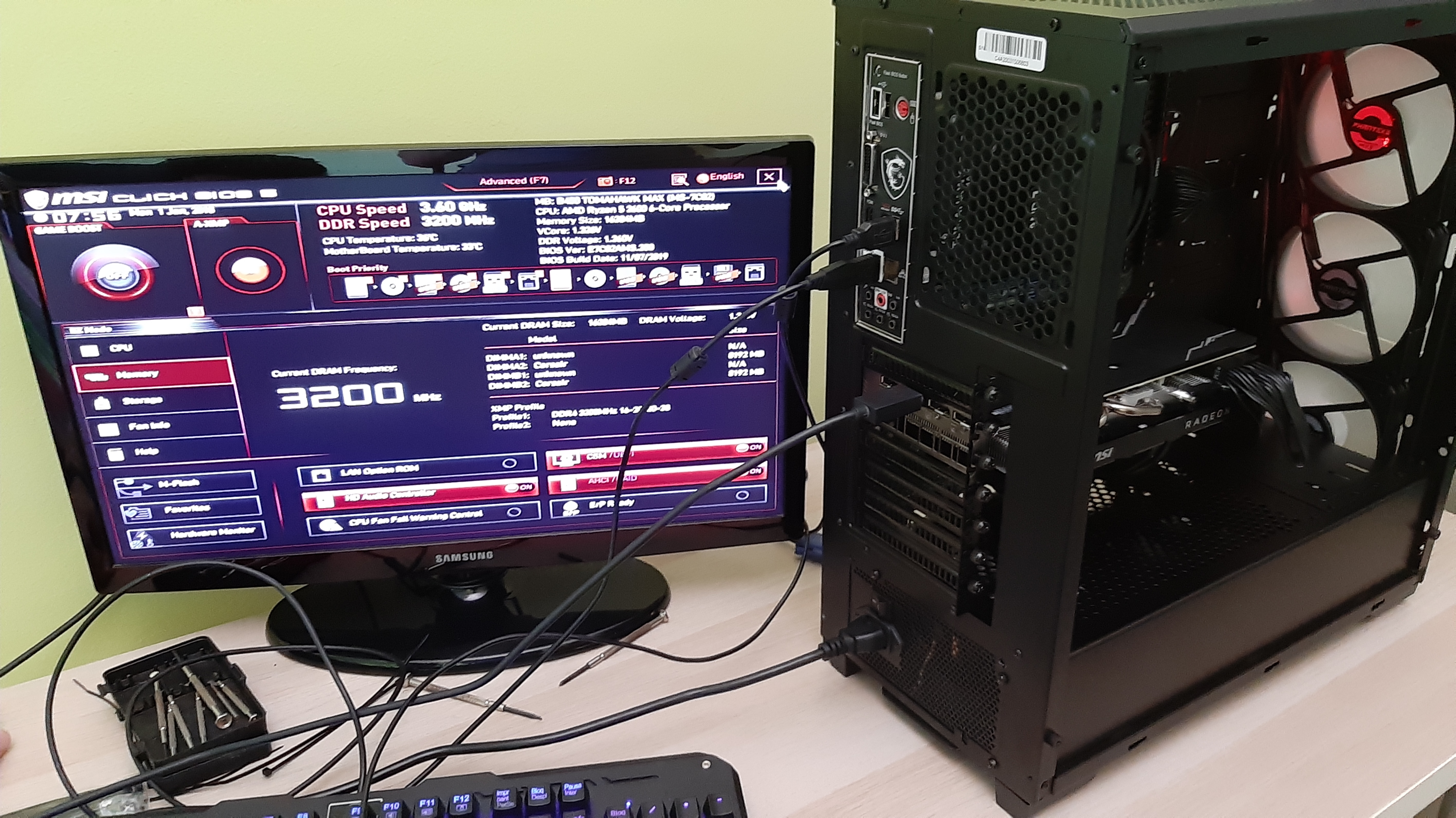 P.S: I'm running like 3 installers at the same time and no shit it batting an eye lol this is awesome. And Windows took literally 5-7min to install. I love NVMe lol.

I love your enthusiasm! So glad it works so well. Building a PC is such a fulfilling job in my opinion. Really like it.

Sounds familiar indeed! I bought some RGB Fusion LEDS for 20,- and I can control them via the Fusion app. No hassle as they can be plugged in with no worries. And the Fusion software recognises it immediately. So you don't want me to buy that key for you?

Yeah I loved it. Totally would pull everything apart and put it back together lol.

I'll investigate a bit as I wouldn't like to have to buy other fans (these are pretty quiet even under load). I'll see if there's some hub that works around the issue. If not then oh well, we'd see.

And yeah no need for the key. It's all working perfectly. Thank you

Have you tried any games yet with the GPU? Wondering how it does. I have no problems with AMD GPU's, but like I said before: I only do simulation games. No idea how it performs with fast shooter games or other fast game play games.

So shiny and clean

I love how clean it is lol. Its sitting here on top of the table and I just keep looking at it all the time lol. It needs some lights within the case because with it all being black (and my idea was to make a black/red build lol) it's kinda too stealth to see inside at times but It's awesome so far. Just need to sort out the fan RGB situation and it'll be perfect.


Maxidyne wrote: ↑
19 Jun 2020, 15:00
Have you tried any games yet with the GPU? Wondering how it does. I have no problems with AMD GPU's, but like I said before: I only do simulation games. No idea how it performs with fast shooter games or other fast game play games.

ATS gave over 120FPS with everything (except VSync) absolutely maxed out, 300% scaling. Lowest I saw was 80FPS in some city for a few seconds and max was well over 200 on the highway. Usual would be 120-150FPS.

ETS2 just about the same. Same settings, all maxed except VSync and 300% scaling. Frames on the Beyond the Baltic Sea DLC (Thank you!) were somewhat similar to ATS, perhaps slightly lower, but I was downloading all of the above games so I guess that must take some slight toll on FPS.

So far so good. No weird stuff, no artifacts, no restarts, no black screens, I've Alt-Tabbed out of games a ton of times and it's hyper fast and stable when leaving/coming back to the games... it's insane.

Only thing though is GPU is always close to 100% when playing (at least ATS/ETS2) which is somewhat louder. I read that GPUs work like that. They just give it everything to get as much FPS as they can. Might limit them to 100 or something so as to drop the fans a smidge, but it doesn't bother me.

CPU temps are about 75-80ºC when under good good load, which is pretty standard compared to what other users get online. I need to get GPUZ or some tool like that (do you guys recommend any) for GPU temp monitoring and whatnot but it's looking pretty good so far. I assume as ETS2/ATS are single core games, they do build up some more heat as those cores that are put to the job do work comparably harder but as said, with 75-80ºC on the stock AMD cooler I'm happy. It's still a good 20ºC away from the hot spot so it's all good. If I get a better CPU cooler later on it's either just for the bling or because I'll be overclocking which to be honest I don't need. I've seen a few guys getting a solid stable 4.1GHz out of this, but I'm good.

It all seems to be well within what other people are getting on the same setup and while the GPU does get slightly loud under load, it all works too damn good. I literally had zero GPU related issues as of yet (and a few network related crap but that has nothing to do with the PC lol) and it's just as stable as one would expect, if not even more, from a system like this: It's just never failing. If you're looking for a GPU upgrade, as of right now I can't not reccommend this. We'll see further down the line.

I'll try some other games tomorrow and see but I don't expect any issue. I'll keep you posted.

So Yesterday I spent a good hour or so calibrating the display settings so as for it to look real with gamma, contrast, color grading, etc. Got it all figured out between the AMD utility and my monitor's settings and was all nice and happy.

I come back tonight, play some and just notice how the display is somewhat beige-ish. I up the color temperature until it's something that looks better but I wasn't 100% happy with how it looked. Was wondering what happened. Maybe it was the incidence of the light in my room (it's a bulb on a yellow shade) or something, I don't know.

So I drop it after a while and just open the notification tray to clear an email that just popped up.

THE NIGHT LIGHT WAS TURNED ON

I scheduled it yesterday but didn't remember to set the times correctly so it just went on at 7PM (pretty strongly I must say, lowered it now and it's good). Jeez, I've spent like 30min trying to figure this out today and it was so simple lol.

Congrats on the build man, I bet it was rewarding when you put in the last part in and it booted up for the first time!

As for the opening speeds, get used to it. That's SSD for ya!

You won't be able to go back now to regular HDD, everything else will feel slow compared to SSD's!

Congrats on the build man, I bet it was rewarding when you put in the last part in and it booted up for the first time!

As for the opening speeds, get used to it. That's SSD for ya!

You won't be able to go back now to regular HDD, everything else will feel slow compared to SSD's!

Was pretty anxious when it first booted lol. It obviously took a little longer and the CPU and GPU easy debug leds did come on a couple times during that and was like "what's wrong with you" lol. When I saw "press any key to restart" after it POST'ed I was pretty damn happy lol.

I need to double check the bios again as the only thing I did was turn the RAM up to it's 3200MHz but didn't do much else.

It does look good

I like this case a lot, and it's pretty cool as well.

Just realised I haven't gotten you guys some proper pictures. Will do tomorrow with some good light - having black everything doesn't help lol.

I'm testing some stuff as well. Will keep you posted.

Hint: DO NOT install Mystic light or Dragon whatevertheheckit'scalled software for the flashy MB lights lol. It messes crap up.

(but it's all looking good once again, for now lol)