Everything about PC's and stuff that have something to do with it, goes here.
Forum rules
Post Reply
231 posts

So we've been getting some really unstable power supply since I posted that last thing.

Lights started flickering and I was about to panic shut the PC down (like always lol) but it went out. No big deal of course, wait for it to power back on and be done with it but my goodness, 2020 and we have power brown/blackouts still, what the hell is this.

I've had tons of those on my laptop due to a faulty battery controller (which I fixed not too long ago actually) and I just got used to them lol. On that one it'd just be a longer boot time once it was starting back up but I never had any issue really.

With this one, as said, just like nothing happened. No issues so far.

About the Mystic Light / Dragon Center issue: I Installed that to see what I could do with the RGB the motherboard has. Lo and behold it was all working too well until it just restarted while playing GTA (@Se7en , @CDMC we need to play). Didn't think about it much, maybe power went out or something. 30 minutes after it did it again. And then it just started doing it every 20-60min. Event viewer says video driver issue (RX 5700 issues hello lol) for each restart. I had read about not installing this programs before but thought mine was ok so I went ahead, and it all went haywire.

So me got to fixin. I removed that, wiped all traces of it, and saw people said some older driver version seemed more stable so I went ahead and rolled that back as well just to be super safe.

We're now back to our stable system. Been using it today for quite the time as well and no issues so far, so considering it fixed. Only even viewer errors are the unclean shutdown from that power outage yesterday and some WiFi bullcrap I need to sort out with the stupid router. Don't install those programs you all

Also, how often / with what tools do you all dust your PCs? I might do that now after these couple weeks of use and make it a routine.

Every 4 weeks I remove the dust filter and blow them out with the air compressor. Same goes for the rest of the PC. And a soft brush for the finishing touch. Once every 3 months I also remove the fans and clean them with a moist microfiber towel. Neat freak...

About the driver: always use the stable one, not the optional one. Those are very unstable...

Maxidyne wrote: ↑
02 Jul 2020, 18:38
Every 4 weeks I remove the dust filter and blow them out with the air compressor. Same goes for the rest of the PC. And a soft brush for the finishing touch. Once every 3 months I also remove the fans and clean them with a moist microfiber towel. Neat freak...

About the driver: always use the stable one, not the optional one. Those are very unstable...

Right, will do the same as well with the cleaning.

The drivers I had were a stable release. As of right now it's a December 2019 release I'm running and zero issues as said. I just read this release was more stable than the current one.

if you have unstable power and outages for the love of god buy a UPS! you can get a decent one for like ~100EU

So nice to see you back!

It's all good and fixed now. Was some bad fuse in the street. No issues since!

It's all running SO GOOD and soooooooooo fast. It's crazy. SSD almost full lol but I'm not in need of much more storage as of now. Come September/October I will get some 2TB WD Black or some other thing. I miss another NVMe slot but hey that's no big deal.

On another note, my brother got himself another one of these!

Similar spec to mine. He's going to uni in September to study Software engineering so he kind of wanted to kit up. Let me use this topic for it so as not to spam other ones:

Total price was dead on 1000€ including a BenQ monitor I can't remember the model of. Three hundred below mine for the build.

And I think that's it. Built it myself with his assistance ofc and I'm so proud lol. We started at like 19:30 and were done by 21:30 which is cool, all cable managed and stuff. Nice and tidy. Loved the build process. Super smooth and entertaining. Mine I built with a friend and he did most of the assembling. Booted up no issues (well monitor was unplugged and we were wondering where the video signal went for a few minutes lol but that was it), OS is all set, BIOS stuff all done and we left it there as it was dinner time. More tomorrow with drivers and initial setup but all looks cool!

Here's the pictures I remembered to take:

Components with my PC on the far right 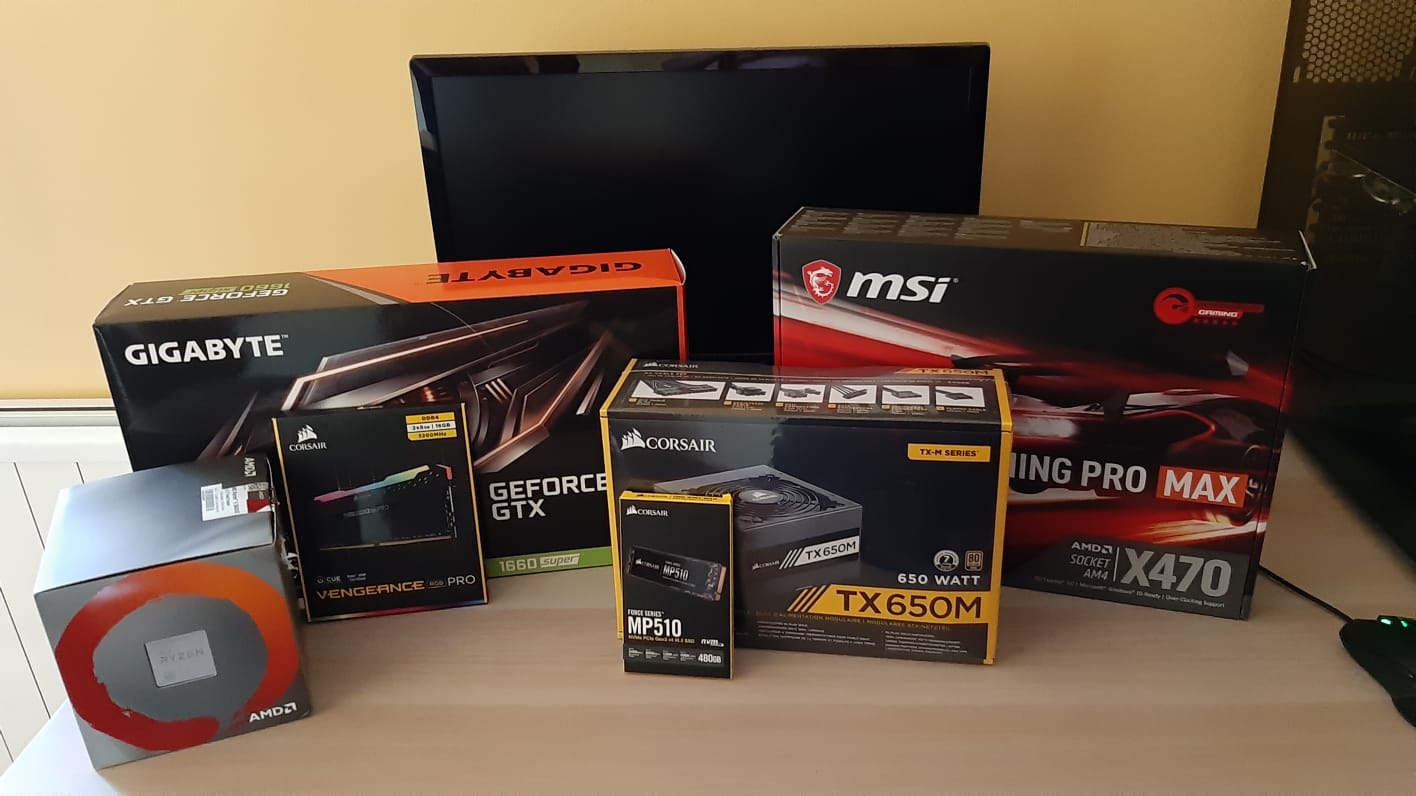 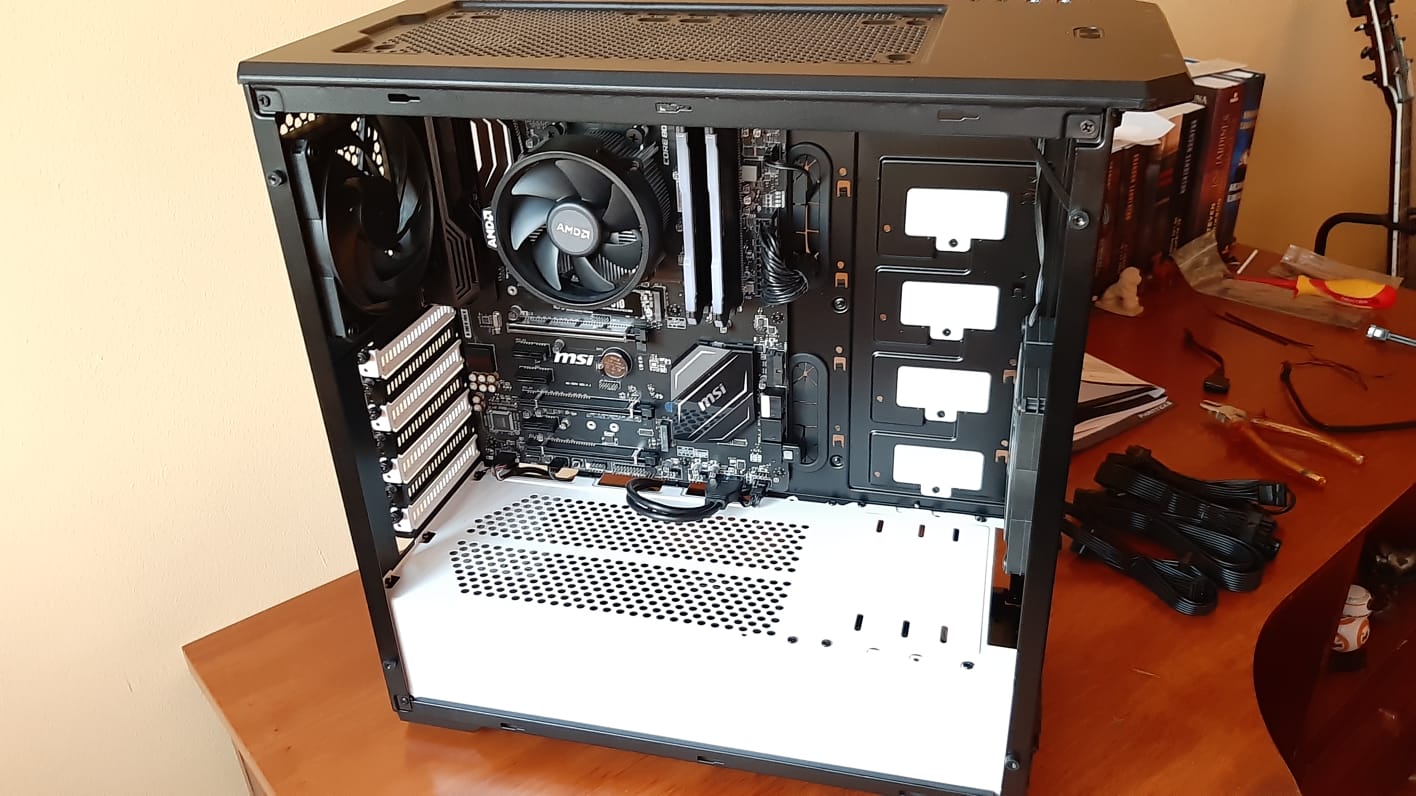 GPU just in and final cable tying to do: 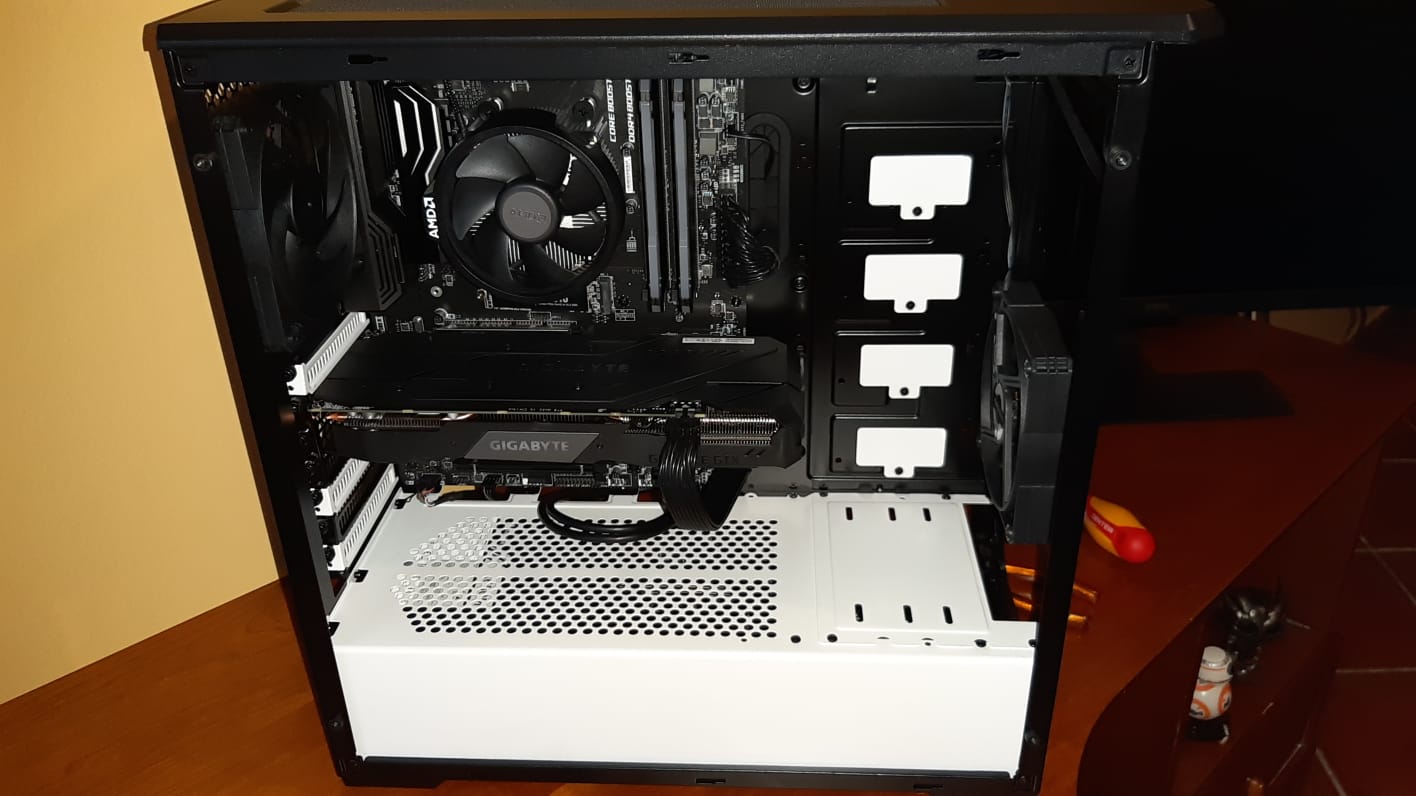 Final result. Pretty proud of how it turned out lol it's better than mine: 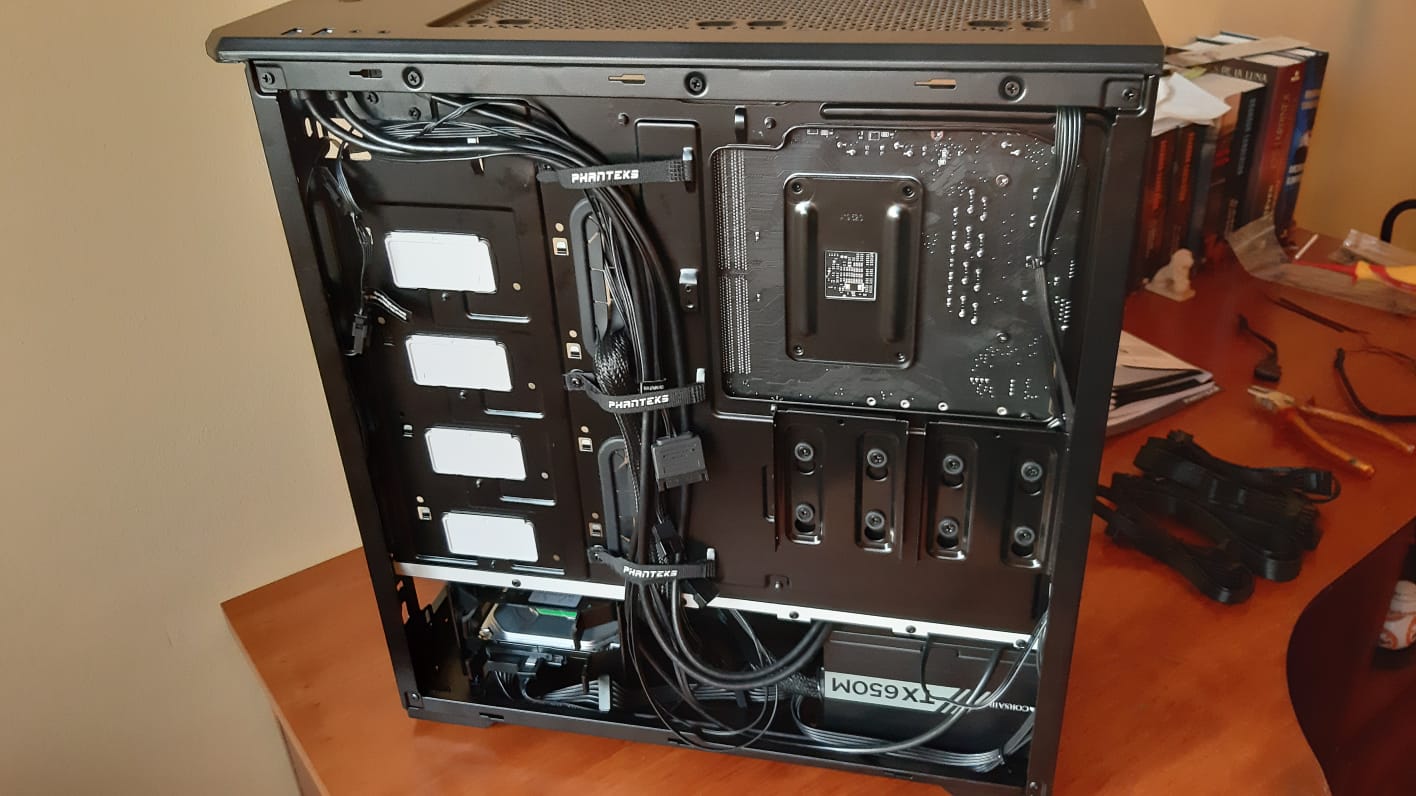 POSTed fine and Windows was on it's way to the SSD: 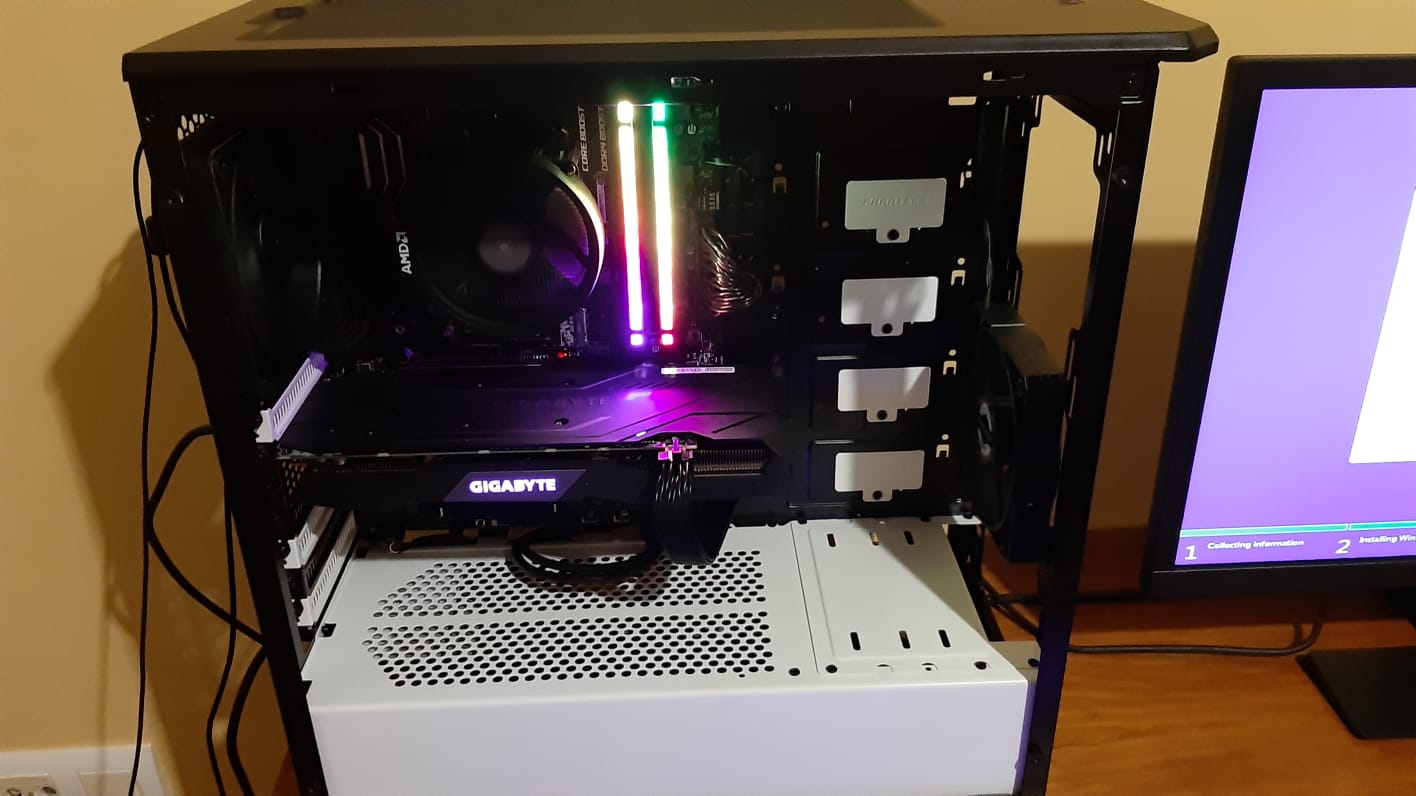 Its Crucial MX500 not Corsair and in the picture its Corsair MP510, how are you always get them confused lol

nice system he got there and good job on build it

I need to upgrade my poverty spec one...

off’n your glass and the bears off’n your ass!
Top
Post Reply
231 posts