Everything about nothing and other stuff that don't fit in other categories goes here.
⠀
Forum rules
Post Reply
145 posts

Let me tell you about some crazy shit I was about to do lol.

Next race is for the AKEX Championship (not the Regional championship which I just picked up the award from). It's on March 27th. Guess who had a wedding to attend March 26th? Yep. Yours truly. It's one of my dad's best friends who passed away around 20 years ago from Cancer. His son is marrying. His family and us have always kept in touch and visited and they want to throw this huuuuge party so how could I miss it? (Spoiler: I won't

Apparently the race was going to be hosted in Madrid, at the track where I did that training day in Jaunuary. My plan was to show up in Jerez (south of Sevilla, southwestern spain) for the wedding Friday morning with the family, meet a friend doing his ATPL Training (David, might remember him from the Flight Simulator Thread), and have Friday night to eat out with the wedding people, and attend the wedding Saturday. That night, sleep not too late to catch a flight to Madrid, gear in hand, at 9AM. Get there 10:30 and attend the race at 1:00 and hopefully do well. Total cost would be around 200€ race + plane ticket + etc. Crazy but I love just fucking off to somewhere to do something I like for a bit lol. Impromptu trips are epic.

We got news that the race was moving to Sevilla (3rd time there and thank god I do well in that track) so it's now an hour and 15 minute drive which I can do Sunday morning no problem, and I save myself around 100€ as no plane ticket is needed.

Stuff worked out alright lol. We'll see how it goes.

So, as I said, Sunday the 27th we travelled to Karting Sevilla for April's round of the AKEX Championship. Day was scheduled to consist of 5 minutes of qualifying and 2 races of 15 and 20 minutes, first one in the normal direction of the track and second in reverse layout.

I was chill coming in as I tend to do pretty well in this track. We raffled karts as always and went to qualify. As soon as I got out on track I noticed that the seat was moving backwards, shifting the weight a lot and causing me to lose front grip completely so I spent all 3 qualy laps readjusting it on the straights, which was hard as we men cannot multitask lol. In the end, I qualified 14th out of 16, pretty far from where I should be anyhow, but it's whatever.

First race underway and I had practically no grip, no matter what I did, both front and back but worse at the front. This made me unable to fight for much. I was thinking I was kind of debating wether it was me driving like shit, because I had zero grip. I would turn in and all I'd hear is tire screech. In spite of that, I finished P13, gaining a position with a kart that, looking at the results of the second race after swapping, had more issues than I initially anticipated, as it finished at the back too. As usual, learned a lot about how to deal with karts like this, but still not enough.

In the second race the starting grid was the finishing order of race 1, so P13 for me. On the lap to the grid I could already tell this kart felt much better than the previous one, so I was hoping to be able to fight a bit higher up. Flag went down (lights turned green), and on the second lap a driver went to the grass in front of me after he outbraked himself and understeered in. Very atypical of him as he's usually a very good driver. Not giving way to the pack that was coming, as he stood in the gas waiting to rejoin parallel to us, but caught a big oversteer and didn't catch it back, he hit me and I spun out, going from P12 to last place. Race Ruined?

Right when I settled the kart again, the last 2 drivers were coming. About 5 seconds is the time I had from sheer anger to "okay, calm down". I sit for 2 more seconds to allow the last racer to pull past and I gun it back on track. Comeback mode's on. 3 solid laps after, I start to catch the drivers in front and overtake without too much difficulty thankfully. Study them well for a couple turns and try to attack where I know I do well. Race goes on, and we keep catching up to people and pulling through, from P16 to P7. For the first time, a position worth celebrating, since I have pretty much done a race with 2 laps less than the rest of the drivers. I do admit my kart was one of the top5 ones, but I'll pat myself on the back for that one.

Video coming when my shit internet gives me a break

Posting again because my stupid ass forgot the pictures 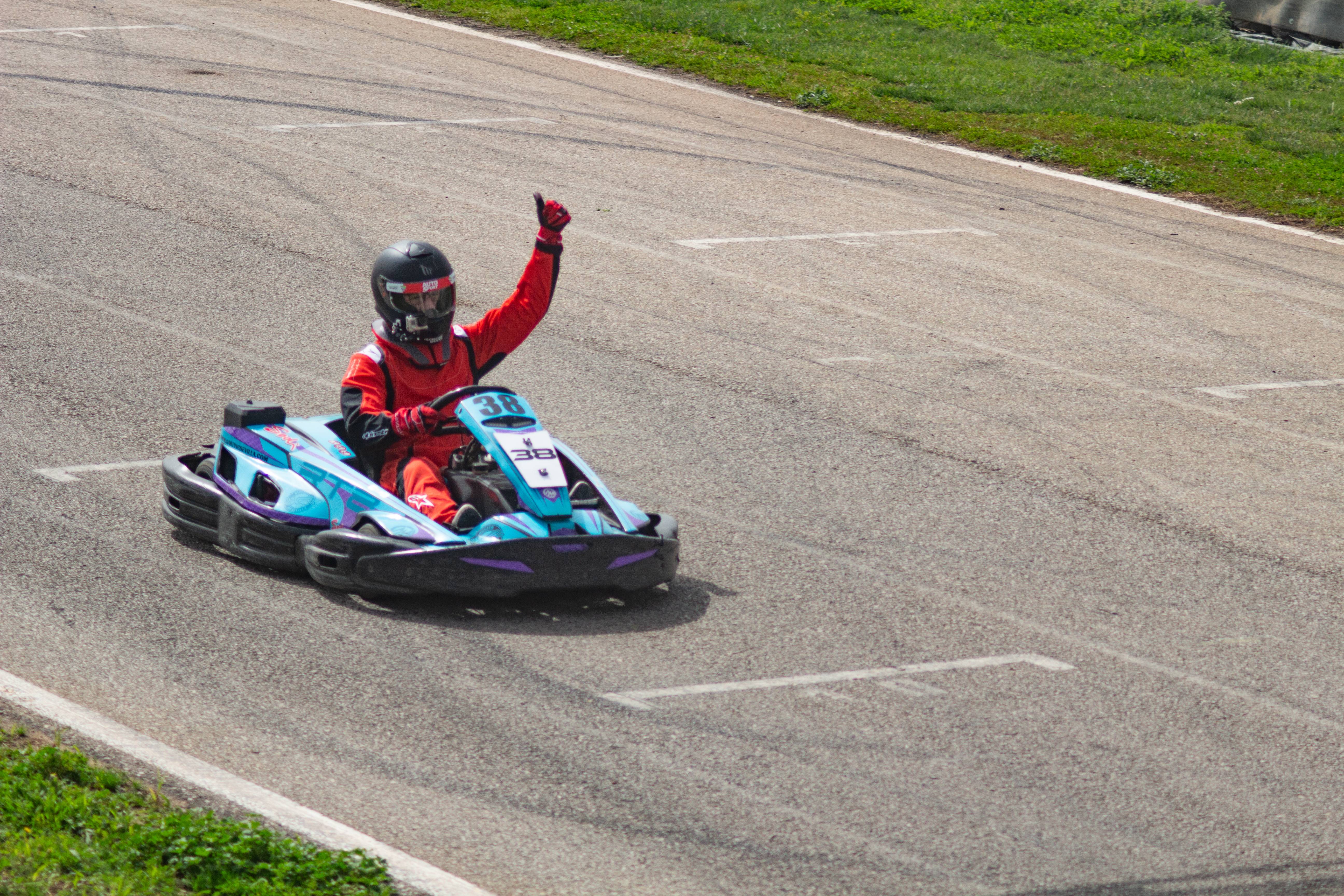 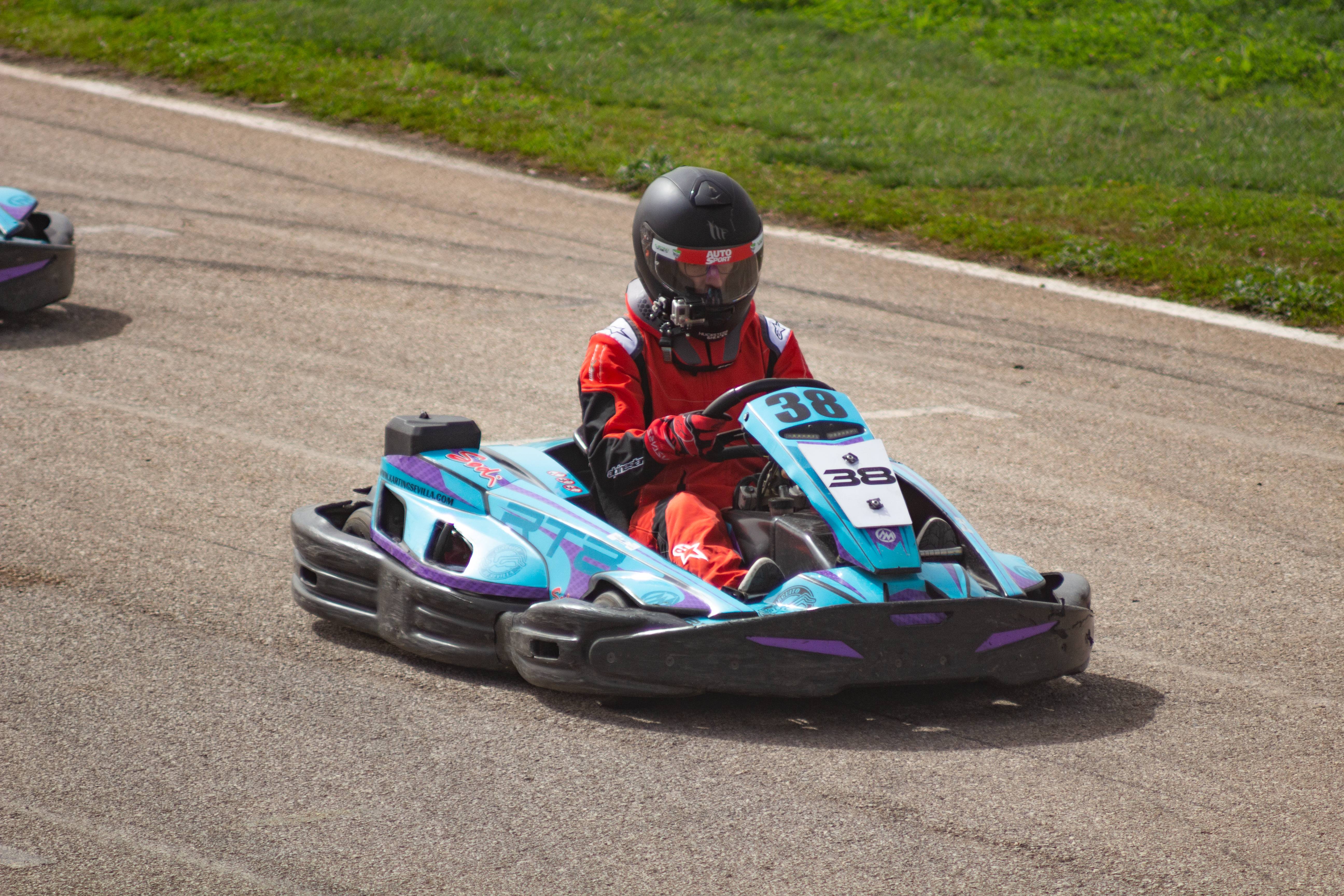 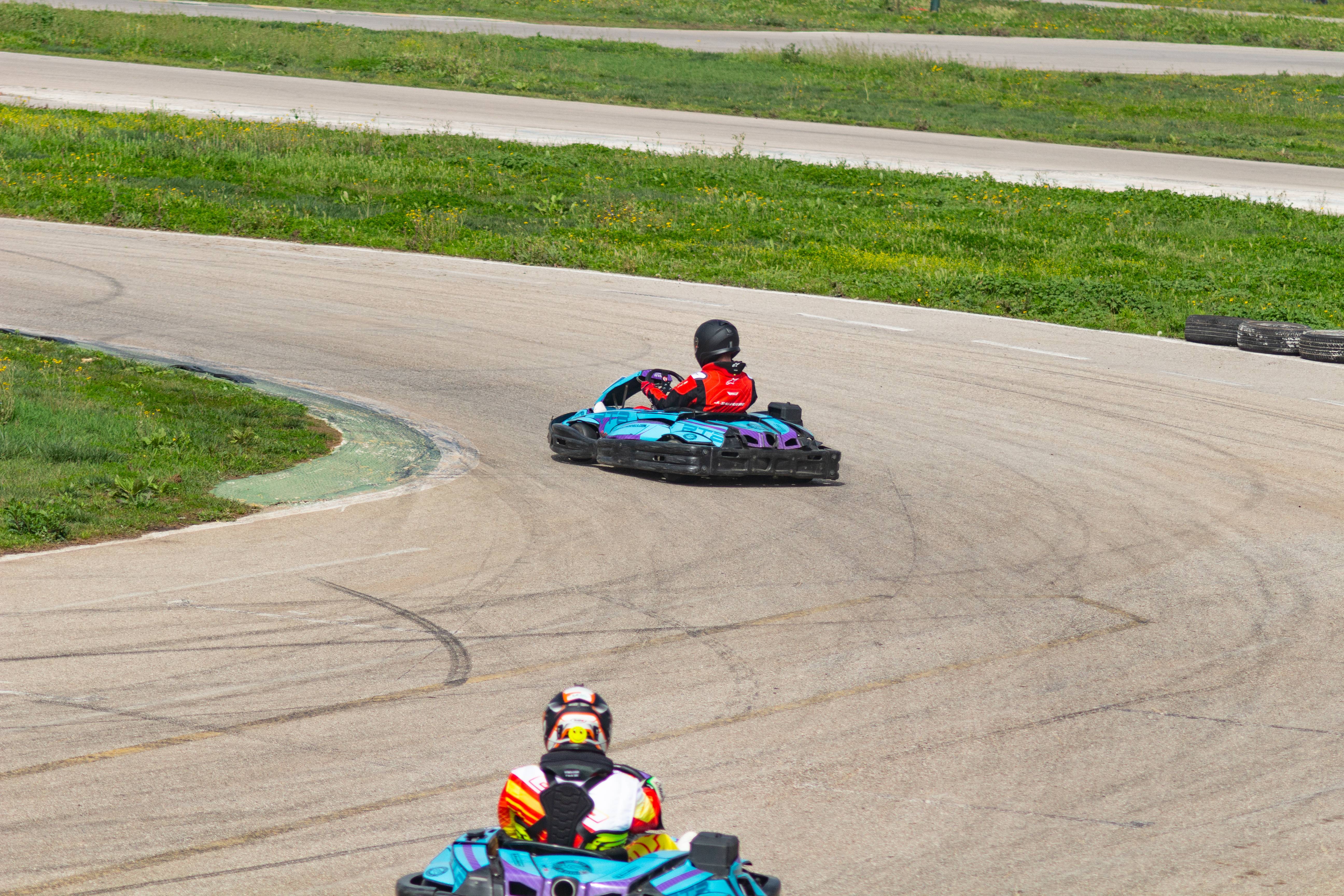 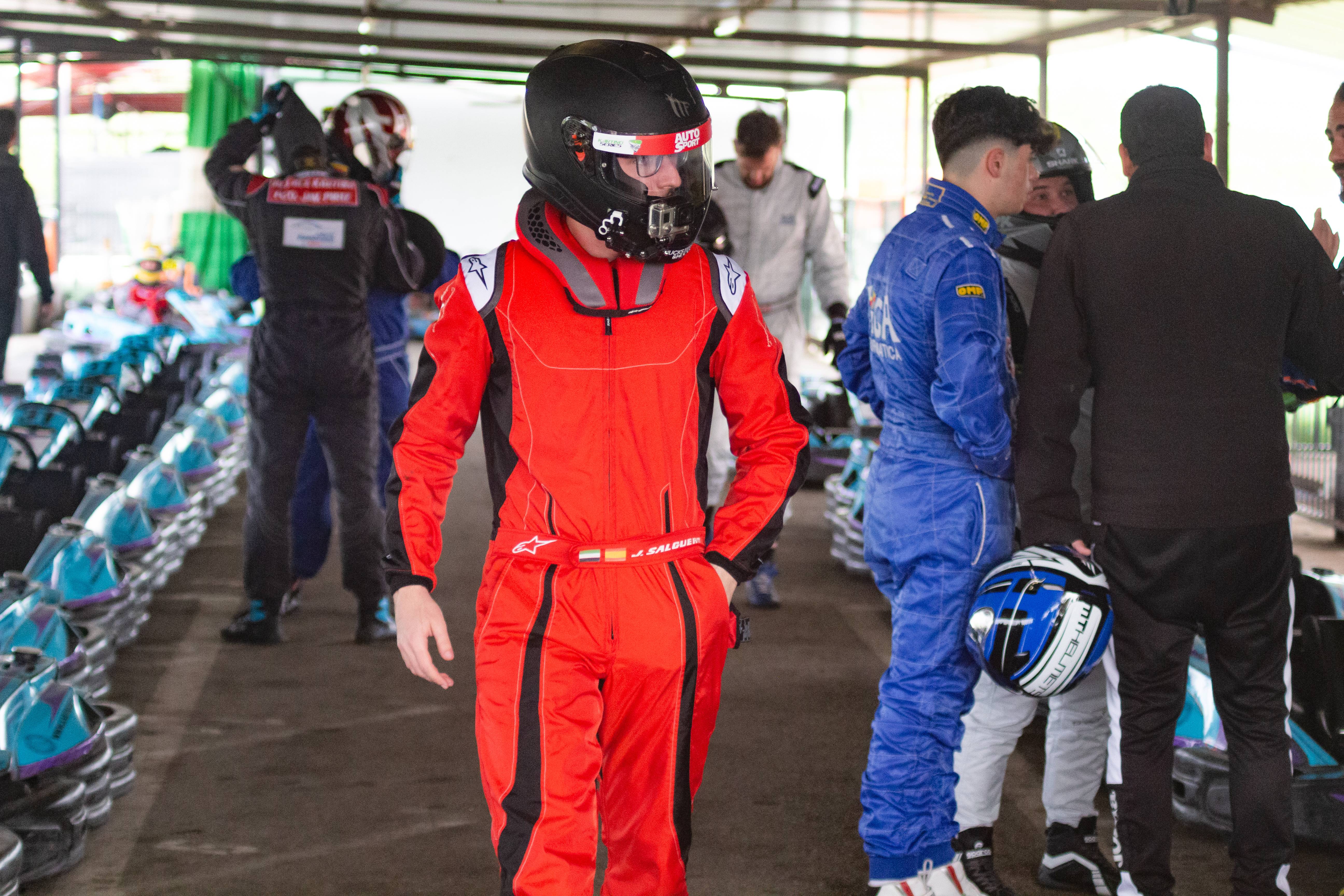 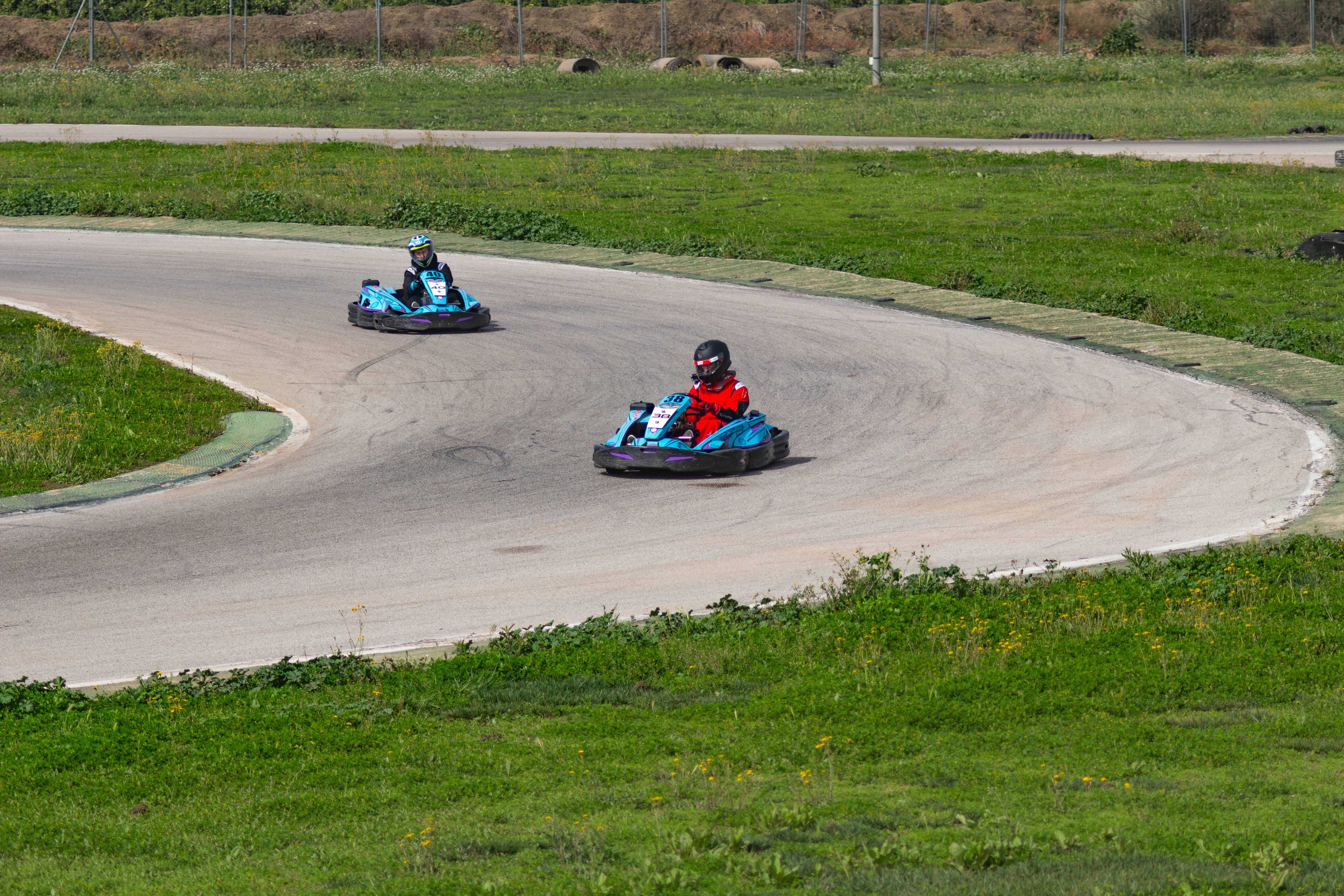 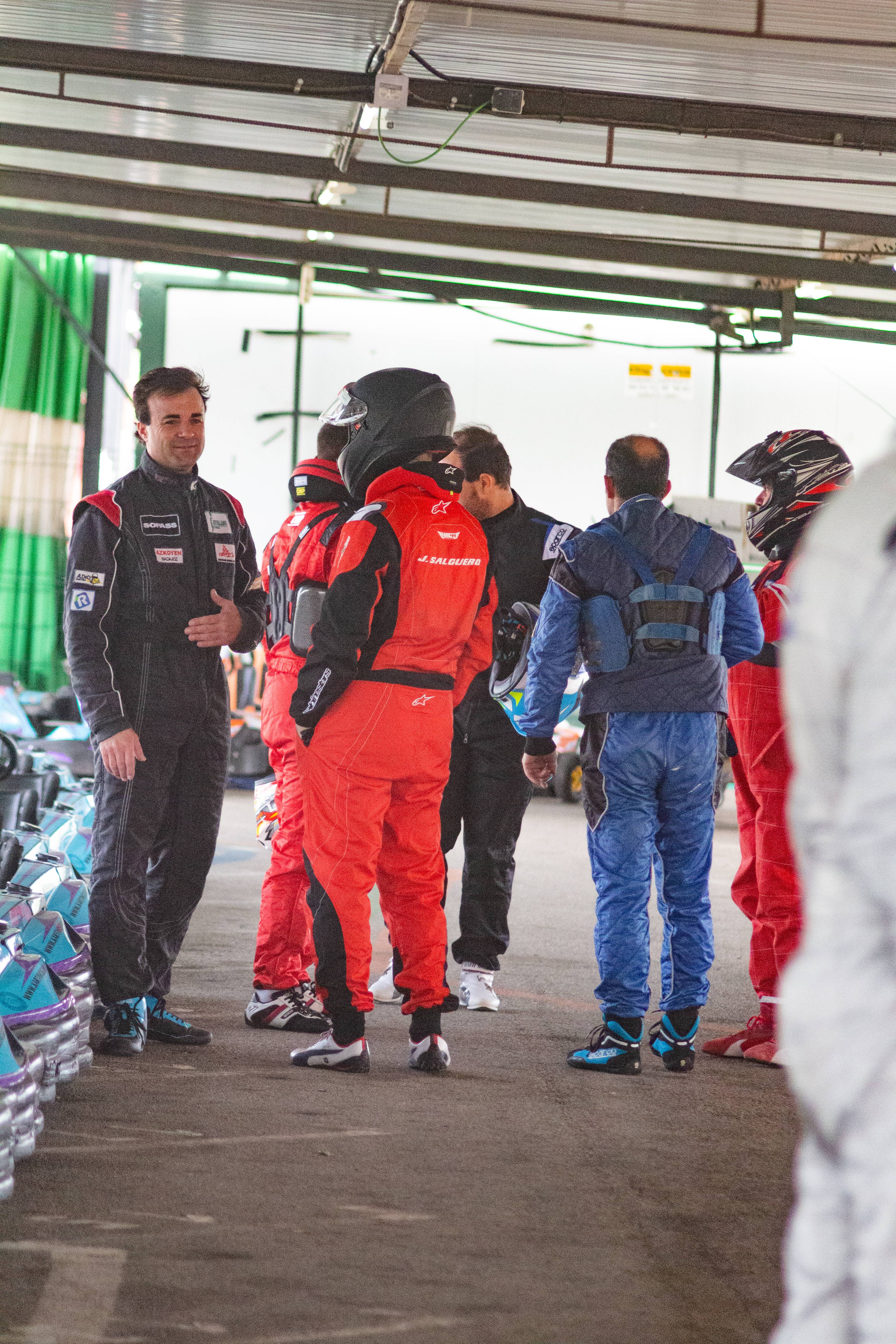 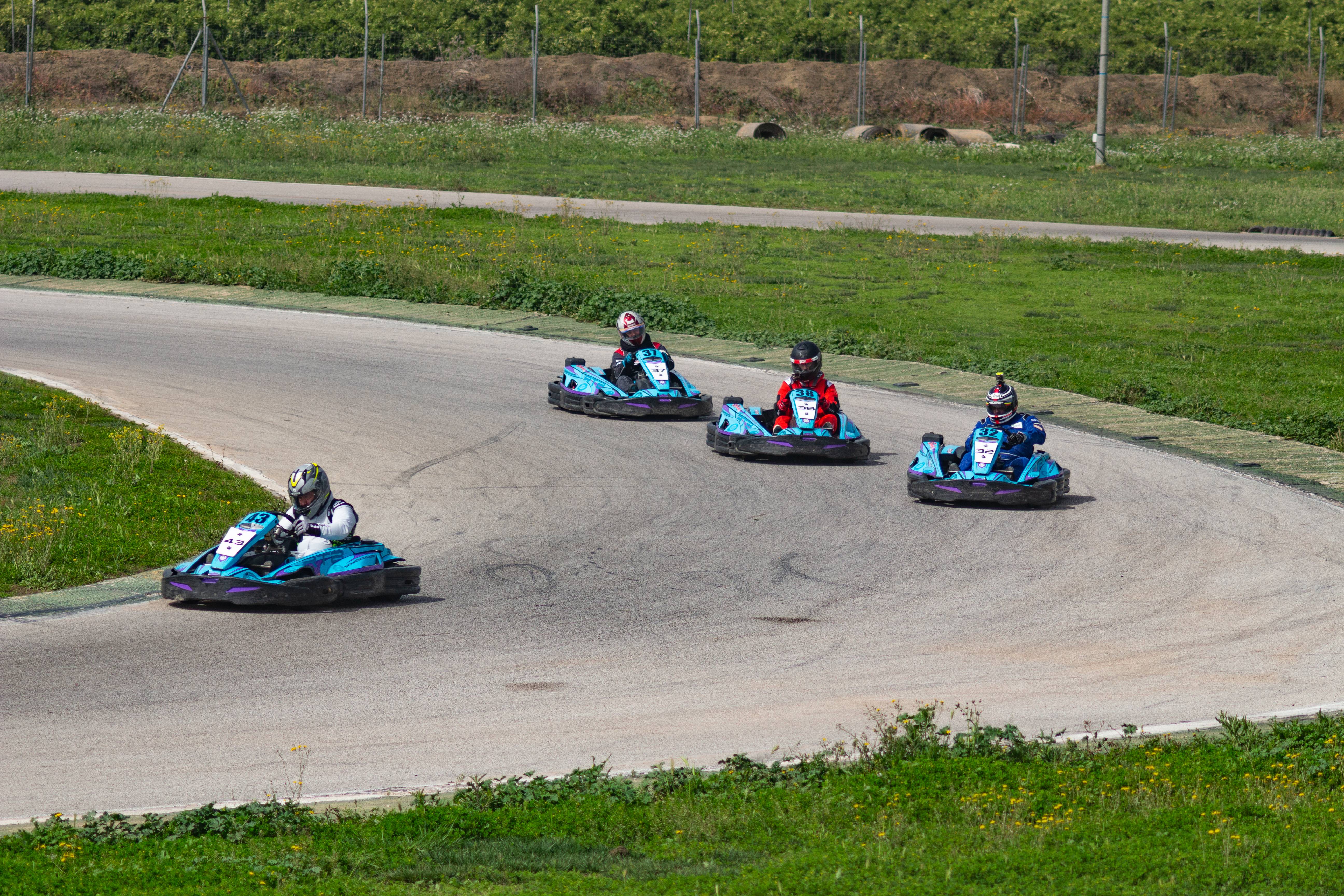 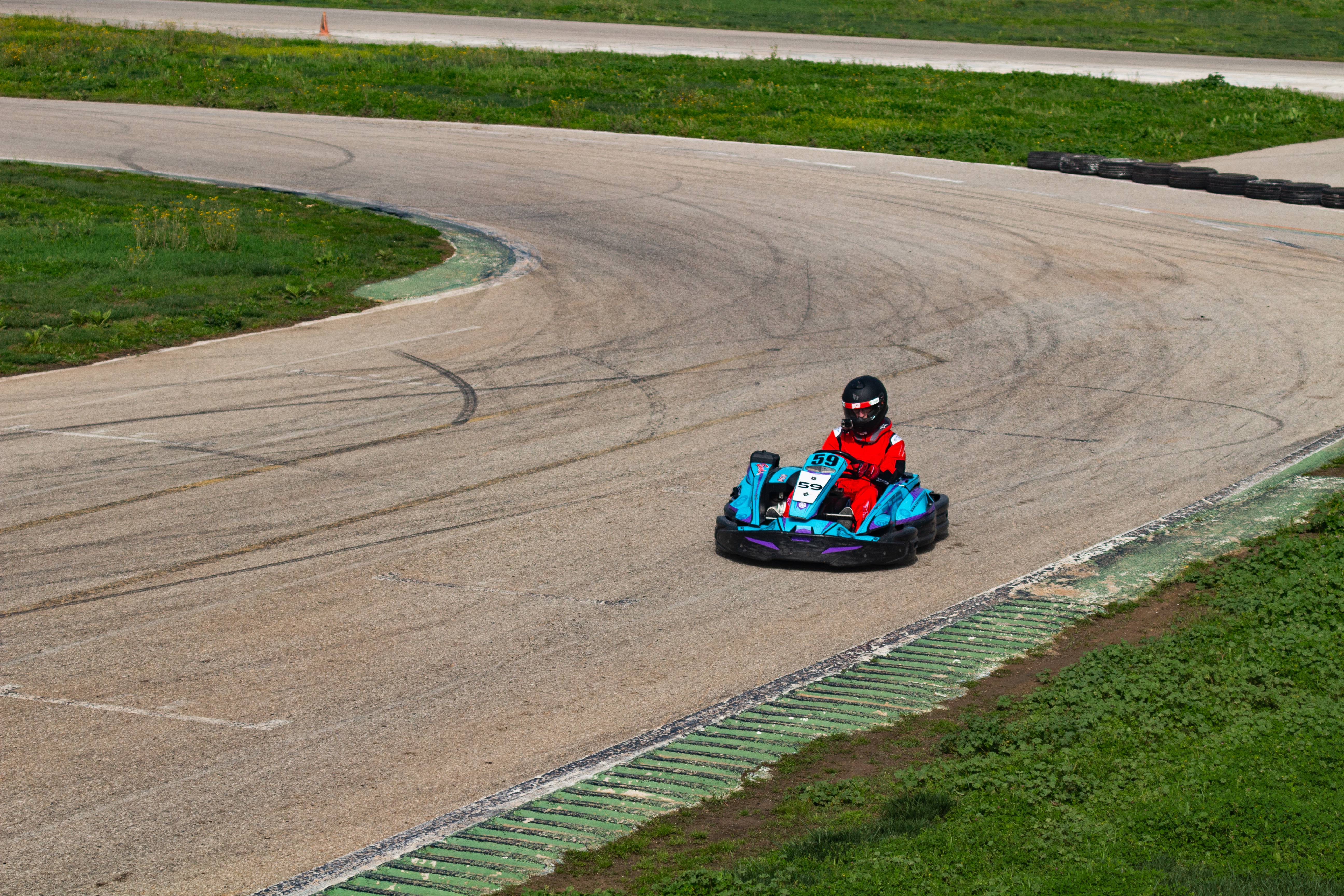 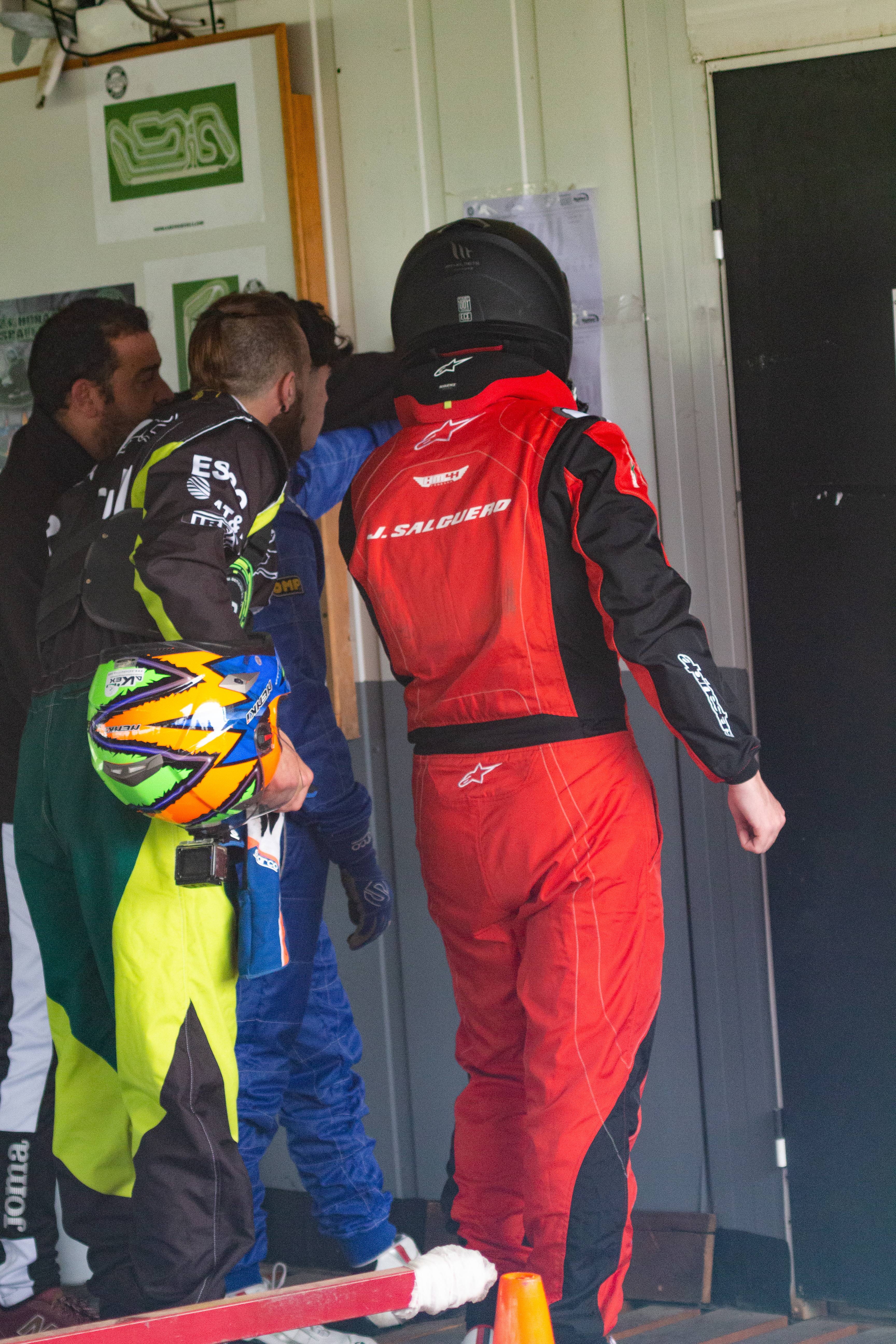 So my sorry ass left the post on the to do list and then forgot about it. lots up work to catch up on but here we go.

April's round was in Evora again. That one track I don't really like. I was determined to have it change this time and do well. Main goal was set on slow is fast, as I know I was overdriving trying to be a hero, and proper cornering with a couple new lines I wanted to compare. As you can see most of these weekends are test days in the end. Trying to find where the line and speed is unless I know the track, which doesn't happen in this championship at all except Sevilla which I caught on really well.

Weekend's plan was a 5 minute qualifying and 3 races as follows:

Qualy as always was very short. Found the lines but was pretty slow. Qualified 2nd to last, on P16 of 17. Consistency on these 4 laps was nonexistent.

Race 1 was decent. A couple fights here and there between P11-P16 which i managed to get into made it interesting. Didn't want to risk it too much so I kept my cool and space. In the end, managed to cross the line P16 sadly, extremely close to P14 with only 0,4 seconds between us.

Race 2 I won't comment much because you're going to get to see it, and hear my rambling in the process. P16 to P5! Didn't feel like I worked extremely hard during it but it was great fun. Apparently I wasn't that slow and my previous kart just wasn't great.

Race 3 saw most of the fast guys behind me now. Had to guard this position well. Managed to hold onto P5 for half the race, and P6 for about another quarter, on the reverse layout which I still need to work on. Pretty solid work.

Overall, finally happy with this track. Still needs work, but man was it fun.

Here's the video from Race 2. Bit of dirt on the lens but a driver ran over a kerb too hard and splashed me with mud. Camera got off lucky on that one with just one speck of dirt lol.

still watching the video. but is it me or this is more interesting and entertaining than F1 now a days? im like yelling WTF when the dude hit you and cheering on when you pass someone xD

question, when you race, do you race with same people, or they are randoms? or is it like F1 with teams and same drivers and stuff?

12:09 i think you finally hit the grand canyon

holy crap it was a big bump

that track is bumpy as hell

also, can you tilt your camera a bit up? anyway, good race, great job! 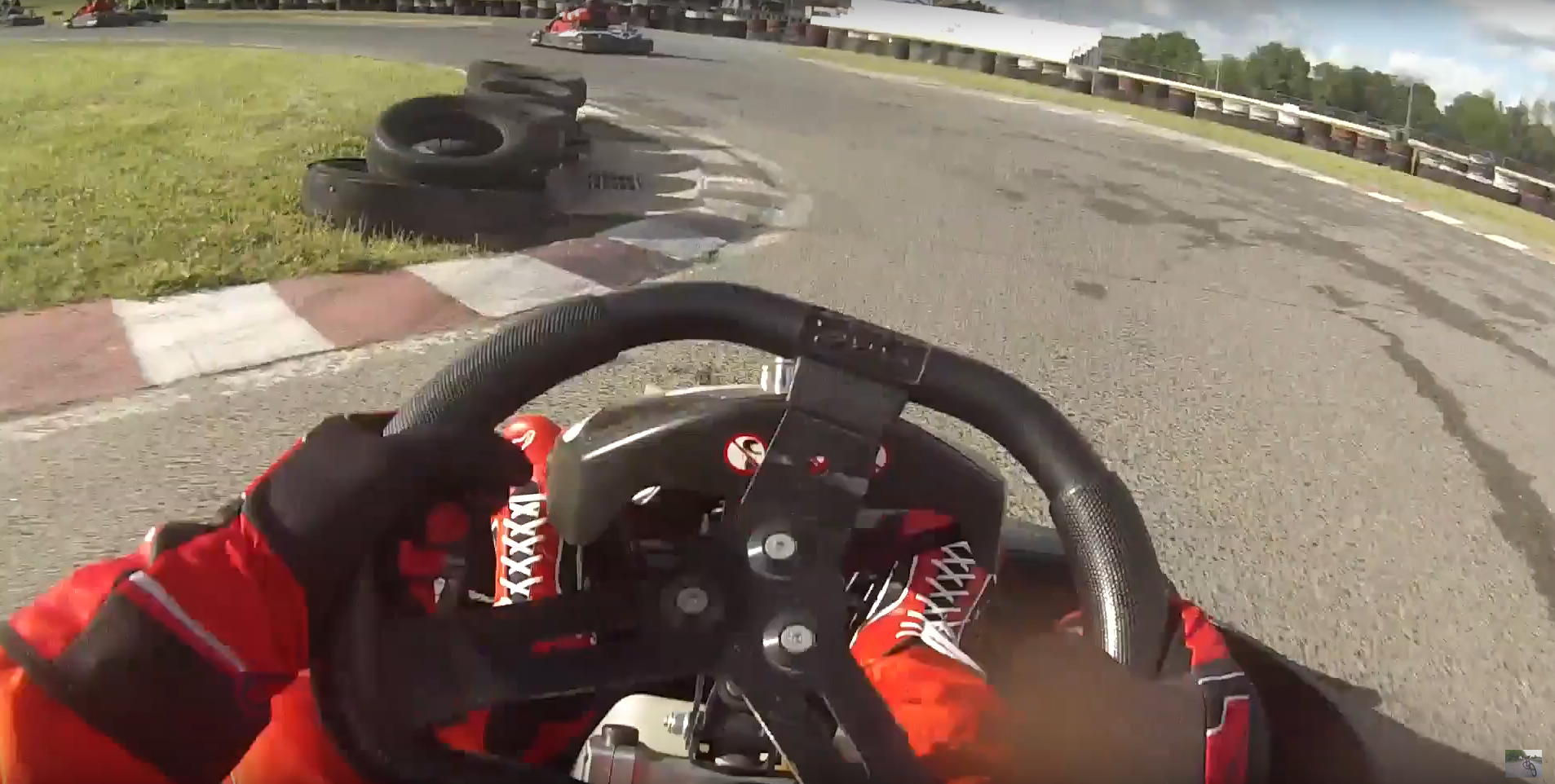 you are mad LOL!

CDMC wrote: ↑
2022/06/02 04:00
still watching the video. but is it me or this is more interesting and entertaining than F1 now a days? im like yelling WTF when the dude hit you and cheering on when you pass someone xD

question, when you race, do you race with same people, or they are randoms? or is it like F1 with teams and same drivers and stuff?

12:09 i think you finally hit the grand canyon

holy crap it was a big bump

that track is bumpy as hell

also, can you tilt your camera a bit up? anyway, good race, great job!

It's too fun lol. I love it. It's a good workout too. in endurance for 1h to 1h30 of racing you'd typically get out 300-400 grams lighter apparently (never weighed in after a race so can't confirm).

I do race with the same people yeah. These leagues are free to enter and you can enter once race and not enter the next one, but almost everyone does the whole season. For June for instance, I'll race the regional championship but not race AKEX as they're on the same day and same time, but normally I race both every race.

6:21: Yeah in there, the kerb is really pointy as you can see and as soon as you hit it and have half the tire in the air, this happens lol. If you fully drop it the chassis scrapes. Not good for speed.

12:09: In there, I knew it understeered in. Didn't know quite how much though and the bump mae me add a ton more steering as you can see if you slowmo it. I also oversteered out because I overdrove the shit out of that corner. Turned in too early too fast.

Glad to hear you liked it! Very happy that you enjoyed it. Track's pretty bumpy yeah. It's old-ish asphalt so that's what happens. Neck takes quite the beating.

you are mad LOL!

That was a much better entry. A bit too little brake, would probably gain a bit with a slower entry and a less upset kart due to that, but hey. I made it through.

About the camera, the mount doesn't allow for much more play I think. I'll see what I can do though

i mean your suite is red after all